Iran’s rich history, culture, and beautiful landscapes have made it a country with a wide range of valuable tourist attractions. Consequently, it may be tricky to decide which tourist attractions to prioritize when planning a trip to Iran. This article has prepared a list of 10 Must-Visit Historical Attractions in Iran to help you plan your trip. Stay tuned to Iran travel guide center Today for more information.

1- A glorious representation of Iranian history, Persepolis of Shiraz City

One of Iran’s most spectacular sites is Persepolis, known worldwide. Persepolis, also known as the legendary city of Persepolis, is Iran’s most famous historical site. It is a historic and magnificent city. Darius, I founded Persepolis in 512 BC. It is known as the ceremonial capital of the Achaemenid Empire. Yet, in the eyes of many historians, its true purpose is still unknown.

Iran’s Persepolis offers a great mix of art, architecture, and culture in all its forms. However, Alexander the Great set fire to this historical site; However, the remains of this monument are still magnificent, spectacular, and valuable, which thrills every visitor. Shapes and engravings in Persepolis’ stones tell stories and represent unique symbols. Make sure to look closely at these engravings while you’re there.

Choghaznabil is an important and top historical site in Iran, built 1250 BC during the Elamite era and one of Ancient Persia’s most prominent religious shrines. In Khuzestan province, Choghaznabil lies near the ancient city of Susa and the ancient region of Haft Tappeh. The Choghaznabil Ziggurat is now famous in Iran and throughout the world.

Iran’s first place of interest is inscribed on the UNESCO World Heritage List. A spectacular and exciting case in Choghaznabil is a child’s footprint left on raw clay more than 3000 years ago.

The Naghsh Jahan Square in Isfahan dates back to the time of Shah Abbas I and is shaped like a rectangle. The longer sides measure 500 meters (from north to south), and the shorter sides are approximately 165 meters.

One of the engineering marvels of the Achaemenid period is Shushtar’s ancient water supply system. You will undoubtedly be amazed to see this old irrigation system that dates back to the 5th century BC. Climb the hill behind this structure and marvel at the view of the water supply system from the top before you discover the water supply system’s mechanism and the habitat of different bird species that reside here. It is one of the Must-Visit Historical Attractions in Iran.

Eram Garden is one of the most beautiful gardens in Iran, which is no less than the best natural garden in Europe. It is also one of the most dramatic historical sites in Iran. Many visitors find Shiraz Eram Garden an indescribable place of splendor and beauty. Only by visiting this garden can you truly appreciate its beauty!

The construction date of this building is unknown. However, manuscripts left in various travelogues are most likely from the 10th century AH. However, this building was rebuilt during Zandieh. Eram Garden in Shiraz has a colorful presence of water, which is one of the most important elements in Iranian gardens. In this historical and natural garden, the sun has influenced the growth of some of the most beautiful plants in the world. In the park’s heart, Tall trees also cast sticky heart shadows. This garden is one of the Must-Visit Historical Attractions in Iran.

8- The tomb of Hafez, Shiraz City

Hafez is undoubtedly the poet whose tomb you should visit among the Iranian poets. In the evening, you can walk around Hafez’s tomb and the garden surrounding it and join the tourists who read his poetry to pay tribute to this famous Iranian poet and enjoy being part of the group. You can even read Hafiz’s fortune at the tomb and discover what this great poet has in store for you.

Biston and Taq-e Bostan are two historical places of interest in Iran located close to each other in Kermanshah province. There are many ancient monuments in Kermanshah province, including the inscription of Biston Darius the Great, the seventh lithograph on the UNESCO World Heritage List, which is written 80 meters above the foot of the mountain. There are no words to describe this complex’s grandeur, and we should visit this complex within 35 kilometers of Kermanshah to properly grasp its magnitude.

The reliefs on the Biston stones and the statue of Hercules are the spectacular remains of this valuable building. The “Hunters’ Cave” is said to Have been residential on the slopes of Mount Biston, which dates back to prehistoric times, about 400,000 years ago. Bostan Arch is another historical and valuable place in this region. On the stones of the Bostan arch, which is a remnant of the Sassanid era, Spectacular images of the last Sassanid king with Ahura Mazda (Zoroastrian god) and Anahita (goddess of the waters of the world in Zoroastrianism) are engraved.

10- The dome of Soltanieh in Zanjan City 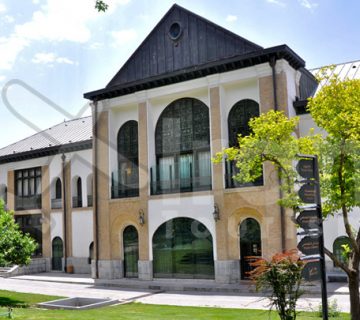