Muharram Ceremonies and Rituals in Iran 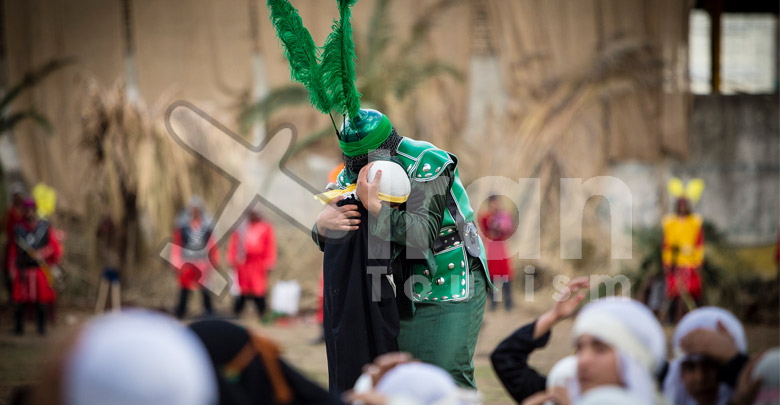 In Iran, Muharram mourning is intertwined with the culture and customs of different cities. Each region of Iran has its own style of mourning and mournfulness. Although Muharram ceremonies and rituals in Iran are very diverse but also, there are many similarities in many mourning traditions of different cities. Mourning groups, Ta’zieh, give sermons and chest beating rite and Nazri are among the ceremonies held in cities across the Iran.

Sometimes these traditions are so interesting that bring people not only from across the country but also from countries to watch. In this article we will discuss the Muharram ceremonies and rituals in some cities of the Iran. Follow Irantourims.

One of the Muharram ceremonies and rituals in Iran is Chamar ritual which held in some provinces. In Kermanshah and Ilam cities, there are attractive symbolic rituals during mourning; one of these rituals is Chamar.

The performing rituals of Chamar among the tribal community of the west of the country derives from its religious roots. Of course, in addition to the days of the Muharram month, the Chamar also is held to commemorate the death of prominent individuals.

Chamar, is a traditional ritual and visual representation of local mourning and mournfulness that can be considered in the territory of the Ta’zieh. This mourner has an ancient history and associated with the mythology of the Neolithic period. In Iran, Phenicia and Alexandria this ceremony was held after the wheat harvest, when the plants were dried.

Now, the ceremony is mostly used for the mournfulness of Imam Hussein. A few days ago, people were informed when and where the Chamar is held. Everyone gets together in due time. During this time, women begin their own mourning. They read moaning sounds aloud.

Then a well-dressed horse with a dagger and a rifle is brought to the field. After seeing the horse, women raise their voices and they do their mourning more vigorously. People make food if they have a nazri and after the ceremony they distribute to the mourners.

Muharram are more specific in Azeri cities such as Tabriz and Ardabil than other cities. One of the famous Muharram ceremonies and rituals in Iran is held in these cities; because during the karbala battle, the Yazid army prevented Imam Hussein and his family from accessing to water and they became martyrs while they were thirsty, this ritual will be held.

Tasht-Gozari, which literally means wash-tub putting, begins three days before Muharram Month on Dhu al-Hijjah (Islamic calendar). The origin of this ritual dates back to the Safavid era.

This ceremony is performed in six main neighborhoods and over 200 mosques.

Some mosques in the city have platforms that are designed for keeping copper and bronze wash tubs during the year. At first, women clean mosques and wash tubs to preparing them for Tasht-Gozari.

In this mourning ceremony, the representatives, hold wash tubs on their head while entering the mosque. They go around the mosque and people touch wash tubs to express their allegiance with Imam Hussein. After that they put wash tubs on the platforms in the mosque and mourners bring jars full of water and pour them into wash tubs. During decade of muharram, mourners drink this water in wash tubs. They believing this water is healer and take it for patients as well.

Another famous Muharram ceremonies and rituals in Iran is Nakhl-Gardani. The ceremony will also be held in Abyaneh village and Kashan city.

Nakhl Gardani is one of the most important Shia mournfulness rituals during Muharram in Yazd province.” Nakhl” is a wooden structure which reminiscent of Imam Hussein’s coffin. The act of carrying the Nakhl (symbolic coffin) from one place to another place is called Nakhl-Gardani. In This religious ritual, is honored the memory of Imam’s funeral.

Every village or city in Yazd province have its own Nakhl. These wooden Nakhl are badge of social unity for a town, village, or district. The ritual is also common in some cities like in Abyaneh Village and Kashan City. Tourists who travel to Iran during Muharram and Ashura can see this ritual in Yazd (Amir Chakhmagh Mosque) and its surrounding like Taft Imam Square.

One of the traditions and customs of Khorramabad and surrounding in Tasua (9th day of Muharram) is the traditional ceremony of the “chehel manbar ” to commemorate the capture of Zeinab.

Zeinab is granddaughter of the Islamic prophet Muhammad. She was the daughter of the imam Ali (the first imam of shia) and older sister of imam Hussein. Zeinab as did most of his household accompanied imam Hussein on Karbala during and after battle of Karbala, Zeinab functioned as a model of defiance against oppression and other forms of injustice.

Zeinab and the other survivors of Imam Hussein’s army, which most of them were women and children, marched to Damascus, Yazid’s capital, and were held captive. While zeinab was captive in Damascus, she held the first mournfulness assembly in the palace of Yazid to mourn the loss of her beloved brother Hussein. Chehel Manbar (means 40 Pulpit) is an assembly to commemorate the capture of Zeinab.

In this ritual, men and women, while covering their faces, repeat the name of God and light the candle to commemorate those who killed in Karbala. In this ritual, many men and women go from house to house with forty candles, barefoot and without talking to anyone, and put their candles in the forty holy public drinking places called Saqqakhaneh (Saqqā-ḵāna).

The mourners also remind their wishes while mourning. They call for intercession from Imam Hussein and his companions. This ritual is known as chehel manbar. In other parts of Lorestan, such as Boroujerd and other cities in the province, this tradition takes a different form.

People in different regions of Iran have various ceremonies and rituals on Muharram. Lorestan’s people hold ceremonies called Gel-mali (rubbing mud) during the first decade of Muharram. In this ritual, people covering themselves with mud as a sign of mourning. Besides this, mourners wear black clothes and beat their chests as a sign of deep sorrow and mourning.

In this assembly people of Khorramabad, prepared mix clay with water and put it in major squares for people to apply it on their faces and clothes as a sign of mourning. On the night of Ashura, they also have Sham-e Ghariban ceremony. In this ceremony, they cover their heads, necks, and shoulders with black shawls, and will light candle.

Finally, if You decide Travel to Iran during Muharram and Ashura, especially, Muharram ceremonies and rituals in Iran you can get necessary information from Iran Travel Guides Center.