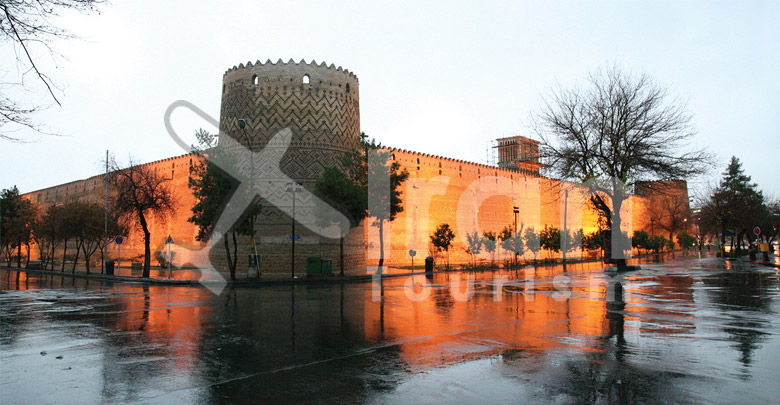 Arg of Karim Khan is one of the most well-preserved castles in Iran, from the mid-18th century period. It is located at the center of Shiraz city, close to lots of other historical places such as Vakil Bath and Vakil Bazar.

What was once the center of the Iranian government, is now a museum of culture and architecture. Also, the crocket south eastern tower of Arg of Karim Khan has driven people into calling it “the Pizza tower” of Shiraz attractions.

so, if you are planning to visit the most famous of Shiraz attractions and best of castles in Iran, Follow this article of Iran Travel Guide Center on Arg of Karim Khan:

Accessibility: In order to get to Arg of Karim Khan you can take Shiraz Metro and get off at Zandieh station. Then you are just a five minutes’ walk away from this place.
Or if you are planning to take the bus you can get off at Shahrdari station which is just behind the palace.

Open days and hours:  Arg of Karim Khan is open every day from 8a.m. to 8p.m.

Short Description about One of The best Castles in Iran

At the beginning of the Zandieh dynasty, Karim Khan, the king, ordered the construction of this Palace.

In order to do so, he gathered the best architects and master builders from all around the country.

The exterior looks as solid as every other Palace, yet the interior which was the home office to the government and later during Qajar dynasty, it was home to the local governor.

But unfortunately, in the later years during the modernization period, it is transformed into a prison and during this stage, most of the interior decorations and plaster works were damaged beyond repair. But still, it is one of the most authentic Castles in Iran.

The interior of Arg is like every other castles in Iran: tall and barricaded walls, with towers and a large gate at the entrance. Seeming nonpunishable!

The south eastern tower is tilted outward a bit, giving it an odd shape and making the locals to call this tower “pizza tower of Shiraz“.

The interior however, is not what you would have guessed from outside. A Persian style garden surrounded by 3 high porches and rooms decorated with plaster works, mirror works, and colorfully stained glasses. These rooms’ walls and ceilings are painted with beautiful patterns, picturing heavenly scenes.

All the rooms are connected together by a narrow corridor, enabling the residents to move through the building without having to go out in the yard.

In front of the western hall, there’s a water fountain, which was powered via an underground water stream coming all the way from the mountains around the city.

On the south western side of Arg of Karim Khan one of the most important Shiraz attractions is located: The Royal Bath House.

It is one of the most elegant and most beautiful bath houses ever made in the country to that time.

All the floors and walls are covered with fine marbles, with separate rooms for dressing, heating the water, massaging, and bathing.

Although most of the decorations and paintings were damaged during the transformation period, but still you can enjoy the greatness of the building, the elegant Persian garden in the yard and the unique Royal Bathhouse.

Arg of Karim Khan is located at the city center. Here as well as other Shiraz attractions, you have access to some of the best restaurants, ice cream shops and “Araghiat” shops in the city which are the most famous souvenir of Shiraz city.