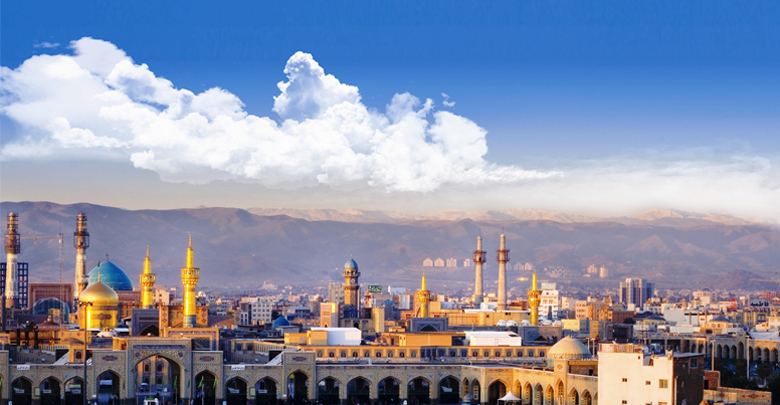 Mashhad City is the second largest city in Iran and also the holiest one. Mashhad city is the home to Imam Reza shrine, one of the descendants of the Holy Prophet Muhammad. So Mashhad tourism is mostly religious rather than historical or cultural, although the city doesn’t lack any attractions in such fields. Due to this matter, Mashhad city’s atmosphere is a bit more sensitive concerning matters such as women’s dress code compared to other cities in the country. But still, there are enough reasons on the other side of the coin to provoke you to travel to Mashhad.

Mashhad city climate can be as hot as 45 degrees Celsius in the peak of summer, and as cold as -15 during winters. So you better be prepared for it before you travel to Mashhad. Mashhad city is one of the most pioneers’ cities in the field of tourism. Everything in the city is designed and prepared so that the pilgrims can come and go at the most convenience.

So follow this Iran travel guide article on Mashhad tourism to find out more about this holiest of cities:

Airplane: Mashhad International Airport is located at the southern side of the city. There are daily flights taking place to and from most of the cities in the country and most of the neighboring countries. You can get to the Mashhad international airport using line one (color-coded green) of Mashhad metro, or taking Line 1 of Mashhad city buses.

Train: travel to Mashhad is possible via Train from Kerman city and Tehran City. There are two types of trains available for Tehran, a normal one that takes around 12 hours, and a high speed one that travels this route within almost 8 hours. There’s also possible to travel to Turkmenistan via train. This train makes stops at Ashgabat and Merv. You can get to Mashhad city railway station via taking Mashhad metro and getting off at Railway Metro station.

Bus: Imam Reza Bus Terminal is located at a crowded district part of the city, but it is easily accessible using public transport such as the BRT buses.

Getting around in Mashhad Tourism

Mashhad Metro: Unlike Tehran Metro, Mashhad metro has only two operational lines. Line one connects south west of the city to the northeastern part. Line two is only partially operating, with not more than half of the stations in the service. This line starts from south western part of the city, all the way to east. Service hours for line 1 is between 6:30 to 23, and for line 2, it is between 6 to 18.

In order to use Mashhad metro, you can use the disposable one ride tickets, or get the rechargeable credit cards from any booth in every station. The credit cards are also used for BRT system and city buses.

BRT: The Bus Rapid Transit system in Mashhad city is available, connecting most of the corners of the city together and also making stops at Imam Reza Holy Shrine.

City Bus: The city buses are a bit slower than the BRT system, but access to more parts of the city. You can use the credit card from the Mashhad metro or pay in cash.

Although Mashhad tourism enjoys from the high number of pilgrims coming to the city every year, yet not many back packers choose Mashhad city as a destination. That’s why there are not many budget options available in the city in order to travel to Mashhad.

Helme Hotel: a budget option to travel to Mashhad, close to the Shrine and Shariati metro station. Located at: at the corner of Bahar and Saberi street

Arsh Hotel: this is one of the best options to travel to Mashhad, because It is close to the Shrine, and Imam Khomeini metro station. Located at: Kamyab Alley, Western Danesh street, Imam Reza Blvd.

Diplomat Hotel: This hotel is located just by the Mashhad Railway station and also has access to railway metro station.

Mashhad city is the most religious city in Iran. Mashhad tourism mostly revolves around the Shrine of Imam Reza. It is the largest Mosque in the world. Tens of thousands of domestic and international pilgrims come here every year to pay their respects. Be advised that during national and religious holidays it gets extremely crowded. Aside from the shrine itself, there’s the museum and the library of Imam Reza which are both rich and highly recommended to pay a visit. The Imam Reza Shrine Complex is accessible by bus and metro.

Mausoleum (Tomb) of Ferdowsi, (one of) the greatest Persian poet ever is here in Mashhad. There are also live poet reciting and other cultural gatherings held here occasionally. Side by side with it there’s the Haroonieh

Complex, which its initial establishment dates back to the 8th century.

If you would like to know more about the history of Iran and Mashhad city during the Renaissance, you can pay a visit to the Mausoleum of Nader Shah. This tomb and museum is dedicated to one of the greatest and yet most brutal kings of Persian empire during the 18th century.

As for nature lovers, you can have a light hike on the Kuh Sangi (Stone mount) which is easily accessible via public transport, or pay a visit to Shandiz village, and enjoy the luxury of the Shandiz Complex and Restaurant. It is one of the most famous restaurants in the country.

Imam Reza Bazaar, located on the eastern side of the Imam Reza street is one of the newly made classic Bazaars in the country. Here you can get your hands on all kinds of local goods and souvenirs.

The Dinner Plate for Mashhad Tourism

Eshkeneh, Shashlik (Shashlyk) Kebab, Reshteh Polo and various kinds of Ash are the most popular local

Iranian cuisine dishes you can find in Mashhad city. Pesaran Karim Restaurant, Baba Qodrat Traditional Restaurant and Shandiz Restaurant in Shandiz village are some of the best restaurants of Mashhad city.

Also, Gooshefil, Qotab, and Koo Koo Shirin are some of the tastiest local Iranian dessert which you must try in Mashhad city.

Mashhad city is very well known for its Saffron plantations around the city. Here is the heart of the production

and marketing of this red colored spice. Aside from that, classic perfumes, prayers accessories and jewelry made with Turquoise and Agate are the most common souvenirs from this holy city.