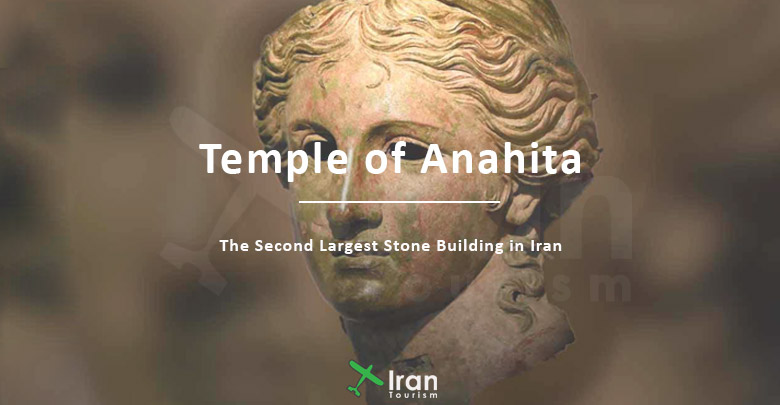 The Temple of Anahita Kangavar is the largest stone structure in Iran after Persepolis, and it is considered one of the ancient monuments of BC.

However, as documented by historical evidence, this temple, which was formerly used as a fire temple for honoring and protecting the goddess of water, Anahita, underwent many changes after the advent of Islam in Iran, and this caused a lot of confusion about the building’s history, architecture, and use.

The monument is located on a hill about 32 meters above the surrounding area. The stone streams around the temple measured the river’s flow and led majestically to the Temple of Anahita’s intake.

Water distribution and flow Temple of Anahita are some of the engineering wonders of the time to display this sacred element in the most beautiful way possible.

On the way from Hegmataneh to Bisoton (modern-day Hamedan-Kermanshah), on a rock above the Kangavar plain, a structure known as the Temple of Anahita was built from stone and columns.

Some people argued that this collapsed building was constructed to honor Zoroastrian goddesses Anahita, a guardian angel of rain and springs. Others consider it an unfinished palace of Khosrow Parviz, the Sassanid King.

However, Anahita Temple is the largest integrated stone structure in Iran. Moreover, the passage Temple of Anahita of time and broader excavations of the temple site showed that this structure hidden in the ground, after Persepolis, is Iran’s largest historic stone building.

Anahita is the goddess of water and the keeper of Forouhar (the symbol of Ahura Mazda, the Zoroastrian god), the god of abundance and righteousness, the goddess of wind and rain, springs and mirages and clouds.

In the stories, it is said about this goddess that clouds came to the earth and gave clean rainwater to the people at her command. This goddess was considered the highest and most beloved goddess by Ahuramazda and the Iranians. Her greatness was a sign of the importance and status of water among the people.

The Architecture of Temple of Anahita

In the architecture of this building, in general, attention has been paid to water and the Zoroastrian goddesses of water. The corridors around the temple led the water to the center of the structure and the square pool beautifully.

Also, on both sides of the Temple of Anahita, the head of four cows was placed in front of each other so that their image would fall into the water when the pool was flooded, and the space would become legendary.

Regarding the fact that this building is a temple, we can also mention the large number of hot marks left by the fire on the stone plates of the building.

The hot symbols seen in Zoroastrian fire temples are the same symbols that indicate the performance of religious ceremonies in this place. The vast columns and capitals attract everyone’s attention. This building was built on a plate with three levels of land, which has become smaller from the bottom up. It is entirely based on Iranian architecture; natural heights, hills, and rocks lie.

Temples and four-arched fire temples have been used for religious ceremonies in the open air. Columns and walls surround a large courtyard. A double-sided staircase at the entrance of the building, the square shape in the plans, and the use of stone, clay, and plaster materials represent Iranian architecture in this building.

How to get to the Temple of Anahita?

Kangavar is the easternmost city of Kermanshah province. It is about 530 km from the capital to Kangavar. Unfortunately, this city does not have an airport or a railway. But its passenger terminal is located between the Hamedan and the factory intersection. If you travel by car, you will see beautiful routes that are a pleasure to watch along the way.

What attractions are near the Temple of Anahita?

What hotels and accommodations are near the Temple of Anahita?