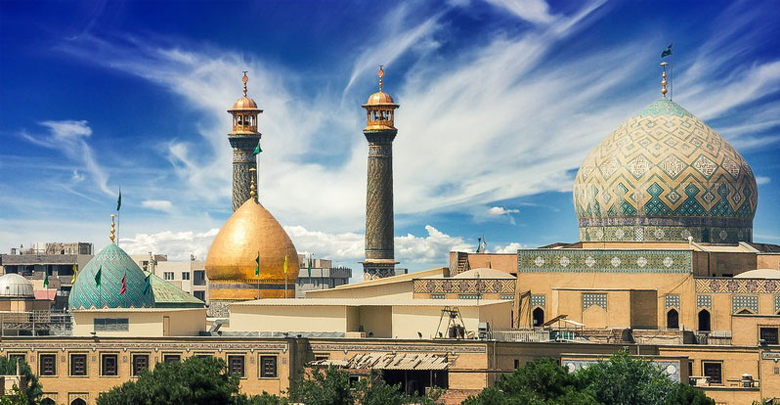 Rey city is located in the southeast of Tehran City. Some people believe that Zoroaster was born in this Iranian ancient city.

If it was true, Rey city would be one of the Iranian ancient city. Also, it has different names as Ray, Reyy or Rai during Iran history.

Moreover, it was located on the Silk Road and also used as the capital by ancient kings as “Ragha” and in Latin, it was called “Rhagae” during Iran history. The Parthian Empire (Arsacid Empire) called Rey as “Arsacia”.

The city had taken its current name as ‘Rey’ during the dynasty of the Sassanid’s.

This glorious city was one of the most important cities of Zoroastrians which is mentioned in their AVESTA book as “Ragha” and it is one of Ahuramazda’s particular creations in the world.

Furthermore, after the domination of Islam to Iran, Rey city became one of the main cities for Muslim especially for SHIA too.

This Iranian ancient city had faced with several wars and it was terminated by foreign invader countries during Iran history.

When you want to visit Iran, Tehran will be one of your destinations and Rey city as an Iranian ancient city is the most historical place in Tehran.

This monument belongs to the Seljuk era.

The tower is about 20 meters high and 16-meters outer diameter.

It has a dome on the top of the tower but, it was collapsed because of severe earthquakes during Iran history. Naser Din Shah Qajar ordered to renew this place in 1884.

The tower’s design acts as a solar clock and its external surface is divided into 24 faces (each represents for 1 hour).

Accessibility: take Tehran metro line1 (color-coded red) toward Kahrizak and get off on Shahr-e Rey metro station and keep your way to Tughrul Tower by taxi in 15 min.

Cheshmeh-Ali located at the north of Ebne Babvaih of Rey city.

it dates back to 4000 BC in the Medes Empire on Iran history.

Also, there is an ancient Rey castle or defensive wall above the inscription, which is located in Cheshmeh-Ali area. Available wall sections are just about 3 km.

Accessibility: take Tehran metro line1- toward Kahrizak and take a taxi from Shahr-e Rey as well as Javan Mard-e-Ghasab metro station to reach your destination in 15 min; you also need 15 min by walking from Tughrul Tower.

Open days and time: All days and hours

Rey is a religious city before and after Islam during Iran history.

It is an especial place for Shia around the world because of Abdol Azim Hassani Holy Shrine.

He was one of the sons of Imam Hassan, second Imam of Shia, son of Imam Ali.

Imam means leader and Imamzade mean born of a leader.

Also, there are other tombs such as Imamzadeh Hamzeh (brother of Imam Reza), Imamzadeh Taher (the offspring of Imam Sajad) and Naser Din Shah (one of the Qajar’s king) beside Abdol Azim Hassani.

The point is women tourists have to enter the main shrine in different gate rather men gates. Also, there is an obligation that women should keep their Hejab with wearing the Islamic veil which will be given to them while they arriving to shrine Courtyard.

Accessibility: Take Tehran metro line1- toward Kahrizak and get off on Shahr-e-Rey metro station then you need 25 min to reach on the destination by walking.

Open days and time: All days and hours.

It’s located on the top of Naqareh Khaneh Mountains of Rey city, the tower is a tomb for one of the princes of the Seljuk dynasty.

Accessibility: 15 min from Tughrul Tower by taxi, also you can use Tehran metro line 1- toward Kahrizak and get off on Shahr-e Rey metro station then you need 15 min to reach the destination via Avini Expr. by taxi.

Open days and time: All days and hours.

The castle is located to the northeast of Varamin city. This monument was made of mud and bricks.

It seems that was used as a defense wall or castle during the Sassanid era. it is the largest one by its type in the world. The height of the wall is about 12 meters.

Today only the walls of the castle remain which are made of mud and some of the interior sections can still be seen.

Accessibility: buy a rail ticket on Tehran Railway Station for Varamin city and you will reach about 15 min to Varamin railway station by train. the ticket price is 80,000 RLS.

Rey Bazzar is one of the oldest markets in Tehran City which starts from Shahr-e Rey main square to Abdol Azim Hassani holy shrine old entrance. It’s a dynamic part of this Iranian ancient city.

It is a kind of small scale of Tehran Grand Bazaar.

It has lots of religious goods to sell but you can also find some Iranian traditional foods and souvenir there.

Accessibility: take Tehran metro line 1- toward Kahrizak and get off on Shahr-e Rey metro station then you will reach to Rey Bazaar about 25 min by walking.

Also known as Bahram Fire Temple which is located on the top of Mil hill on the southeast of Rey.

Only the bases of the temple remained from the Sassanid era and it has two reverse “U” form that was held huge fireplace as a foundation during Iran history.

Accessibility: take Tehran metro line1- toward Kahrizak and get off on Kahrizak station then take a taxi to temple and reach after about 25 min.

I hope you will find this information useful for your Iran travel guide.