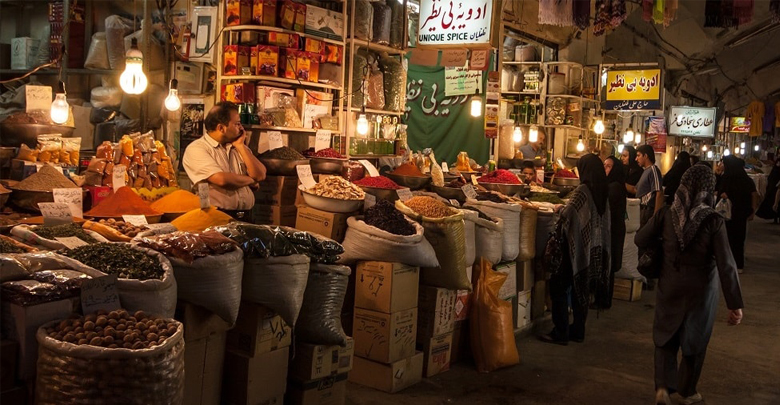 Tehran Grand Bazaar is the economical heart of Iran. Every major producer, factory, manufacturer and… owns a shop or a branch here to introduce and offer their products to the consumers. Wholesale shops are working side by side with stores and the line of the cargo carriers seems to never stop. Aside from that, this is where most of the major political and cultural movements in the history have started or been escalated. The design and shape of Tehran grand bazaar has changed and improved since its establishment. yet still it has kept its original motifs and principles. You experience a different way of shopping in Iran at Iranian bazaars.

Follow this article from Iran travel guide to learn more about Tehran grand bazaar and shopping in Iran.

Accessibility to the Tehran Bazaar for shopping in Iran

you can get to Line 1 (color-coded red) of Tehran metro and get off at Khayam or 15-Khordad station. also if you get off at Imam Khomeini station, you can take the carriages or electrical rides to the bazaar.

you can also get yourself to any of the major bus terminals in the city and from there get to Tehran bazaar. Most of the terminals have one or two lines leading to it.

Most of the shops are open Saturdays to Thursdays from 9 A.M to 8 P.M. but some of the shops, especially the ones in the alleys and Timches, or the ones which are the whole sellers and the jewelry stores, close at 5 or 6 p.m.

History of Tehran Grand Bazaar goes back to around 17th century. Back then Tehran city was just a small city under the shadows of Rey city (Persian: شهر ری). But later on, during the 18th and especially 19th century when Tehran became the capital of Iran, Tehran Grand Bazaar really started to transform into what it is right now.

Tehran Grand Bazaar is a composition of smaller markets, each of them working on and selling an exclusive product, such as the jewel market, copper market, clothes market and…

And surrounding these markets, other businesses such as restaurants, tea and coffee houses, mosques and religious centers, accommodations, bathhouses, Zoorkhaneh (traditional gym/Persian: زورخانه) and etc. were established to answer to the needs of the shopkeepers. This long and entangled chain of businesses is what makes Tehran grand bazaar into what it is today.

Like every other oriental bazaar, Tehran grand bazaar is a series of narrow and entangled streets with shops at both sides of it and every now and then there’s a mosque or prayer house for the local shopkeepers.

To have a cover against harsh sunlight, these streets are covered with roofs with a small hole at the center of them to allow the ventilation. At certain points of these streets, there is a big yard called Timcheh, surrounded by stores. This was designed to give people a break from the dark and crowded streets of bazaar.

What to buy, where to buy it

Scarfs, Hats and gloves: Jāfāri Rastē is one of the best places for high-quality gloves, hats and scarfs shopping in Iran. Most of the producers have a shop here, with various designs and the half price.

Clothes: Kuwaiti Bazaar is a 5 level bazaar for shopping in Iran, dedicated to clothes and accessories.

Edibles: Chahar Sūq Raste is where you can get everything your kitchen needs.

Jewels: Tāla Forooshan Raste is home to most of the Jewel shops and Watch seller shops in the Tehran bazaar.

Purse and backpack: Moshir Khālvāt Shop is the center of carry-on bags, purses and backpack sellers of the bazaar.

Home appliances:  get your hands of Iranian and International brands of home appliances in Hajāb-ol Doleh Raste

In Tehran grand bazaar, every intersection that connects two of the major streets is called Cheharsuq. The Grand Cheharsuq with its low ceiling and spectacular plaster works is a must see. it was constructed around 120 years ago and is located close to the Grand Masque.

This is one of the most beautiful and original mosques in Tehran. It is the main mosque of Tehran bazaar. It was established some 200 years ago. The mosque has been a political and social hub of Tehran, lots of historical and ground breaking speeches have taken place here. Locals also call this mosque Māsjede Shah (the Kings Mosque)

This Shrine is located at the end of the mercers’ market. It is the third most religious place in Tehran, after Shah Cheraq Shrine and Imamzade Saleh shrine (at Tajrish Sq. near the Tajrish traditional bazaar). The date of its establishment goes back to very first days that Tehran grand bazaar was established. the architecture and design of the exterior is worth watching and the mirror works of the interior would make you hold your breath and cover your eyes.

Here also the last king of the Zandieh dynasty is buried, marking an end to the reign of the descendants of Vakil-Ol-Roaya (the attorney of the commoners).

This large yard is located beside the Grand Mosque. It benefits from a spectacular design and all alone was worth registering in National heritage list. Although now a business center has been constructed inside it, but still the architecture and beauty of it is worth visiting especially for photography.

This yard is located close to Sabze Square at the entrance of shoemakers’ market. The design of the dome is relatively different than the rest of the timches and even the grand bazaar itself. So if you want to know what a Timche is, but don’t want to go deep into the bazaar, Mahrye Timcheh is a good choice to take.

With more than 140 years of experience, some say it was this restaurant that introduced the royal dish of cholu Kebab to the common people, tourists and bazaar shop owners.

It is another old and great place to try the original taste of Persian cuisine. if you want to learn more about the Iranian cuisine, Iranian dessert and sweets, Iranian food culture and etc. check out the related articles.

This restaurant has been established only for 15 years now, but it is certainly the most crowded one. You can recognize it from the line of some 50 and more people waiting in front of it. They are especially famous for their Tahchine and Kobideh dishes.

To find this place, you really need the help of the locals and their guidance. Located in Saraye Azizi, this tea house is really popular among bazaar shopkeepers for its Omelettes and breakfast dishes.

The smallest tea house in whole Iran! it is just 1 meter by 1! but it is one of the most original ones and Haj Ali Darvish, who has inherited the store from his father, is a really nice and interesting person to talk to. It is located at the main entrance of Tehran Bazaar. But to find its exact location, you need to ask around the locals.

Tehran grand bazaar is a place so amazing that you could easily spend a week in, and yet not be able to see it all through. The history and culture behind every step and every brick of this place is mind blowing, and no matter how many times you go there. There is always a new thing to make you entertained. or new products for shopping in Iran.